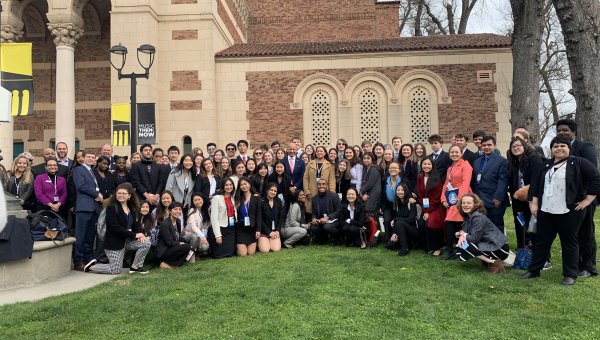 Inspiring future leaders through youth advocacy and teen programs which foster participation and engagement with our collective social well-being.

MUN mimics a real United Nations model, which is transformative for youth who's horizons are expanded through grappling with international issues. California YMCA Youth & Government has offered the MUN program to middle school students throughout the state since 2001. Middle school students (delegates) are given the opportunity to discuss international issues, discover other cultures, develop life-enhancing skills, and make new friends. The four-month program culminates when delegates from around the state meet at the annual Model United Nations Summit in Los Angeles, California.

88% of Youth & Government Alumni over the age of 25 have received a bachelor's degree or higher.

Y&G was honored by the White House in 2013 as a CHAMPION OF CHANGE for successful work in youth development.

Youth & Government Alumni are 30% more likely to vote than other young adults.

Through Youth & Government's Model Legislature and Court, thousands of teens in California take over the Sacramento state capital building. Each conference brings together diverse students from across the state to experience the governmental process first-hand through a unique “youth-run, youth-led” model. The first two training and election conferences are held in mid-November and mid-January in Fresno. These events prepare youth for their roles at the formal Model Legislature & Court conference held over five days in mid-February at the State Capitol in Sacramento.

Once in Sacramento, the bills developed by delegations during the fall are debated in committees, then on the floor of the Assembly or Senate and, if passed, sent on to the Youth Governor. Additional program offerings for delegates include: The Supreme, Appellate and Trial Courts, Broadcast and Print Media, Lobbyists, Board of Education, The State Constitutional Convention, Political Parties, and The National Issues Commission, along with many more!

The core purpose of Youth & Government (Y&G) is exemplified in its motto "Democracy Must Be Learned By Each Generation.” Founded nearly 70 years ago, Y&G ensures that our future government leaders understand the principals of citizenship, leadership and democracy, along with the YSF’s core values of caring, honesty, respect and responsibility. By developing concrete and applicable skills, taking on new and exciting leadership roles, and building strong relationships with peers and mentors, participants become more civically engaged while building a solid foundation for their future.

We're proud of this life changing experience for teens. Youth & Government has been nationally recognized, and has garnered statewide support in the form of Bill AB 233 signed by Governor Jerry Brown, that allows for voluntary contributions on the state income tax to support the program.

A Reflection on Pride - From Oppressed to Empowered