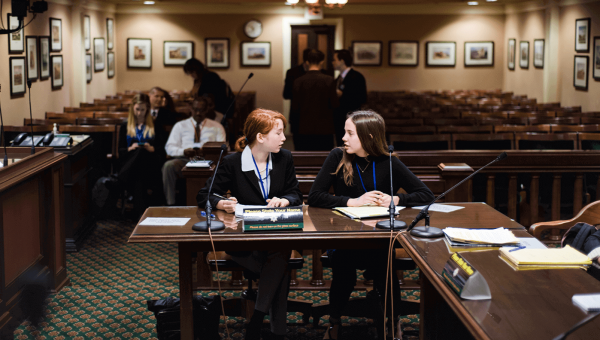 MUN IS SUSPENDED AND WILL RESUME IN APRIL.

The YMCA Youth & Government (Y&G) Model Legislature & Court program is a truly unique and immersive educational and social experience for high school students (ages 14-18). Y&G is a 6-month, learn-by-doing experience for participants to discover the tools to make a true impact on our democracy and our society. Delegates experience government firsthand through a series of conferences with thousands of other youth leaders, culminating in a 5-day conference at the state capitol in Sacramento. Taking on the roles of state legislators, attorneys, lobbyists and other officials, they navigate government processes and work together to develop real solutions to real issues. Y&G is a place for teens to raise their voices and be heard while building skills in leadership, public speaking, research, critical thinking and true civic engagement.

If you or a family member are interested in participating, please contact Youth & Teen Director, Brandon Drake at bdrake@ymcasf.org or 415 666 9602. 2019-20 will be our launch year for the Richmond District delegation and we hope to measure interest from the community as we get started.

The California YMCA Youth & Government – Model United Nations program is a simulation of the “real-life” United Nations Assembly for middle school students. Students will research, debate and establish policies, treaties and resolutions.  The focus will be on international issues, including disputes between countries, peace-keeping responsibilities and stabilizing financial markets.  The program concludes with an Assembly involving youth from YMCA’s all over California, representing each nation recognized by the United Nations.

The program will run once a week for 1.5 hours, starting in November, and host 3 weekend conferences. Within the program delegates’ research, debate and establish policies, treaties and resolutions. Their main focuses are international issues, including disputes between countries, peacekeeping efforts, border crisis, stabilizing financial markets and dealing with hunger, disease and poverty. The four-month program culminates when delegates from around the state meet at the annual Model United Nations Summit in Los Angeles, California. The Training Conference curriculum includes a thorough orientation of the overall program and its program areas, as well as workshops that focus on culture acceptance, public speaking, and leadership skills. Delegates also receive an introduction to the staff, role training, and a chance to meet program participants from other across the state.

Delegates participate in the program through the SFY/Richmond delegation. SFY/Richmond hosts weekly meetings starting in November, which are mostly facilitated by youth officers but are supported by adult advisors and volunteers.

Point Bonita Day Trip (local): Lunch will be provided and students will have an opportunity to meet other students in MUN from San Francisco. The day will focus on building relationships through activities that challenge them and explore leadership development.

Participation in this program supports these initiatives: