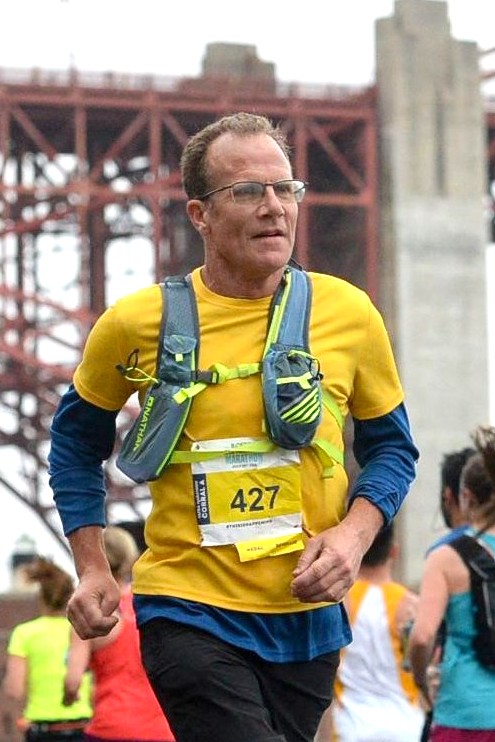 Steve Snyder ran 4,406 miles in 2020 (which is an average of 84.7 miles per week or 12 miles per day) which makes it hard for any runner to vy for the top leader position no matter how much you’re training on the YMCA of San Francisco Runners & Walkers Group (but we dare you to try). At 58 not only does Steve run many, many miles, he runs them fast; up, down and all around San Francisco’s hills all times of day and night. (For example, during one week in July he ran 14 miles on a Thursday, followed by a 25-miler two days later. Less than 24 hours after finishing 25 miles at a 10:24 pace, he ran a 13.1 mile half marathon at a 9:08 pace, and this seems to be, just an average week.)

To add to his list of running accomplishments, he virtually completed running across America this year, coast to coast, a total of 2,572 miles. He embodies the Y’s spirit through his generous and unwavering support of other runners no matter how fast or far, helping seniors into and out their cars so they can access the Y’s facilities, and through his support of time, resources and energy to the Y community.

Local legend Steve answered some questions we’ve all been wanting to ask:

How long have you been running?

I ran my first mile chasing my big brother in the summer of 1968 at age 6 while we watched Jim Ryun chase Kip Keino for the 1500-meter Olympic title in Mexico City. We were living in Ann Arbor, Mich. and ran half a mile down a country road from our home and back. We ran the mile a few more times until we discovered bikes.

My second bit of running started around 1974 at age 13 in San Francisco. I'd run a few training 5K’s a week. I'd run by myself, with my big brother, and sometimes would run into Walt Stack, founder of the Dolphin South End Runners Club (the largest running club in San Francisco) and run with him along Crissy Field and on the Golden Gate Bridge. A 5K was an endurance feat for me at the time and it was hard to imagine how people could run Bay to Breakers (a 12K). My running ended in 1976 with a cracked kneecap while playing football in the neighborhood.

Third and present running started in July 2000 at age 38 after a 24-year detour into unhealthy ways; drinking, smoking, and weight gain.

I’ve been running for a total of 23 years.

What do you do to help you prepare for a good run?

I don't like to start until I'm relaxed and ready and am in a relatively relaxed mood and not preoccupied with something else. Like today I was going to run but then I could tell my wife wanted me to stay home and do some quiet work around the house with her. So, I'm hoping to run a few hours later after dinner. For me a proper warm-up is necessary if I'm running an organized run with an official start – otherwise I start off slow and warm-up on the run (frequently I see the run as just a bunch of warm-up runs pieced together).

What’s your all-time favorite race? Why?

Probably the double SF Marathon. I like the journey downtown (which I don't get to do often anymore). I enjoy the camaraderie on the run – the small field (30 to 50 runners or so) and showing San Francisco to visiting runners and helping them navigate the city in the middle of the night. And then a few hours later jumping into a field of 30,000 runners on the same course which is then well-lit and marked. The two runs ran back-to-back are [literally] night and day.