I always look forward to a hike. Being outdoors, breathing fresh air, seeing the mountains or the bay in the background… and the physical workout. I love that part.

I often take my kids with me, and they’re generally game, though they’d much prefer to “meander” rather than “hike.” They like to pause, take detours, touch things, notice things.

My kids are much like John Muir, it turns out. He was quoted in Albert W. Palmer’s “The Mountain Trail and Its Message” as saying,

"Hiking - "I don't like either the word or the thing. People ought to saunter in the mountains - not hike! Do you know the origin of that word 'saunter?' It's a beautiful word. Away back in the Middle Ages people used to go on pilgrimages to the Holy Land, and when people in the villages through which they passed asked where they were going, they would reply, 'A la sainte terre,' 'To the Holy Land.' And so they became known as sainte-terre-ers or saunterers. Now these mountains are our Holy Land, and we ought to saunter through them reverently, not 'hike' through them."

I’ve thought a lot about this quote since a colleague shared it with me.  Perhaps the best way to encourage a lifelong love of the outdoors is to allow-- actually encourage-- youthful meandering.

And while we know that the outdoors is generally good for us, intentionally sauntering in nature- soaking up the smells and sights and textures- can boost immunity and reduce stress.  In fact, this meandering has a name- “forest bathing” - a less directed outdoor experience that melds mindfulness and nature immersion to improve health.

So, I think i’ll head outdoors for a… saunter. 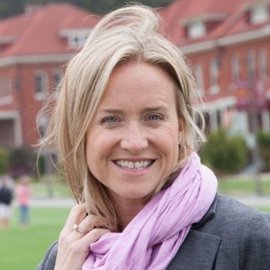