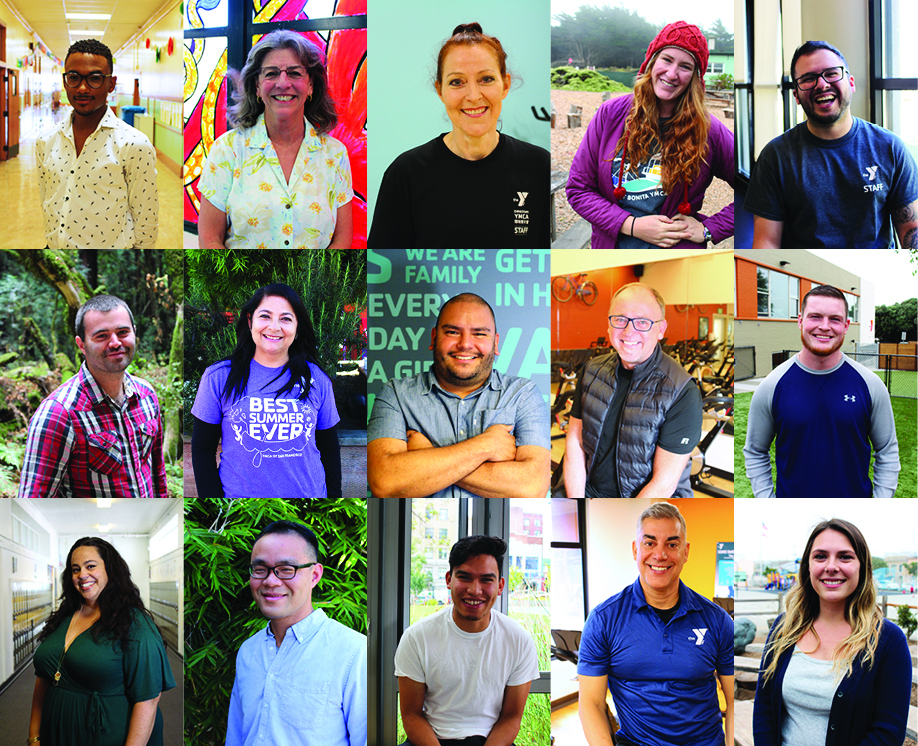 EVERY YEAR, OUR ORGANIZATION HONORS ONE STAND-OUT EMPLOYEE FROM EACH OF OUR 15 Y LOCATIONS.

These employees exemplify the character values of honesty, respect, caring and responsibility in all areas of their work. They also:

Let us introduce you to our 2018 Employees of the Year!

Michael is always willing to assist and provide input whenever it’s necessary. He takes on so much but always has time to lend a hand. He never does his work for recognition but with this award, it will show his work will not go unnoticed. Michael is the truest example of a team player. Michael has been working tirelessly at the Y for 13 years and at the Association Office of the YMCA of San Francisco for almost three years.  He is so selfless and demonstrates the Y's core values every single day. His attitude is always positive. He is great with members and is a great team player. We couldn't be more proud of you, Michael. Congratulations!

Angela is a strong, compassionate and dedicated leader within the Bayview Hunters Point YMCA. She is committed to supporting youth and young adults successfully transition into a positive and healthy lifestyle. Not only does she do stellar work within her program, Angela also supports other members of our team by mentoring and coaching them through professional successes and challenges. Angela can always be found providing a listening ear to others, lending a hand and staying late nights if needed.  Additionally, Angela demonstrates a high level of professionalism and is a role model for others.

Hakim lives and breathes the mission of the Y. As a former program participant, he returned to work for the Buchanan YMCA as an adult during the 2015-16 school year to provide youth with the foundations and support he received as a youth. During this time, his continued growth has been centered around providing the best possible opportunities for youth in the Western Addition community. He continues to challenge himself to gain new skills and grow as leader, working his way to ExCEL ASP coordinator for the upcoming school year. He is always open to taking on additional responsibilities, such as Beacon Bridge and Beacon Leadership Team (professional and youth leadership cohorts for the Beacon Initiative) and participating in our annual giving campaign. Even when he faces a setback, his positive approach and growth mindset allow him to bounce back with greater resilience and stronger focus. He is the consummate team player and always looking for ways to forge strong peer relationships with his co-workers. He is definitely a future YMCA leader on the rise!

Over the last couple of years, Xander has stepped up at every opportunity and thrived. He has been able to more than double the enrollment in the BOLD (Boys Outdoor Leadership Development) & GOLD (Girls Outdoor Leadership Development) backpacking program. Camp Jones Gulch need staff like Xander because he is able to really scale what we are doing and impact more and more youth in the outdoors. His leadership in program management and marketing has made a substantial positive impact on the Camp Jones Gulch YMCA.

Deanna has been an integral part of the YMCA of San Francisco in many capacities since 2011, working in group ex and wellness across the association. As her role developed and she became a program coordinator, her positive impact on the association, department, and community was undeniable. She is energetic, compassionate, inclusive, knowledgeable, trustworthy, and definitely a cause-driven leader deserving to be Chinatown YMCA's Employee of the Year.

Carlos has been a growing force within the Y and has taken leaps in his career development here at the Embarcadero YMCA. Carlos is a great representative of the Y's four core values (caring, honesty, respect, and responsibility), and has stepped up tremendously this past year. He is a consistent performer and recently got certified in ZUMBA®, Aqua Fitness and Personal Training in order to increase his value to our members and organization. Well done Carlos.

Deb is constantly going above and beyond to help others; staff, and members.  She puts her heart and soul into teaching and the kids love her as a result.  She makes the hard work look easy. Deb is patient and kind and her dedication and persistence has helped the aquatics team at Marin YMCA stay on track and push forward amidst some recent staff transition. Deb's smile and positivity brighten every room and situation and we are so lucky to have her on our team.

When Argentina started, she was simply a volunteer, and then she moved on and she got an on-call position and after that she has grown so much. She has the two-year-old room, so she is the first introduction for the kids in a classroom setting. She is really patient and makes those connections really early on with the kids and their parents. Argentina is a compassionate, dedicated teacher who goes above and beyond for her kids. She is truly an exemplary staff and team player. She is passionate about early childhood education and contributes immensely to the Mission YMCA preschool.

This year Carlos really accomplished becoming a leader.  He took a place as our coordinator during a time when we were going to have a lot of vacancies and he just really took ownership of the membership department and managed the branch with a great attitude. Working with Carlos is just a great experience. He’s always smiling, always happy and you can just hear his laugh throughout the whole building. Carlos is an amazing person, and very much loved at Peninsula Family YMCA. We’re very happy to have him as the Peninsula Family YMCA’s Employee of the Year.

Becca has been a key part of the Point Bonita YMCA team for two years. She attended outdoor education at Point Bonita as a 6th grader and that experience shaped her future career goals. Over the past year she supported the summer 2017 camp program through staffing and programmatic changes, became a full-time staff member working in the outdoor education, conference and family camp departments, becoming instrumental in the success of all three of those programs. In June 2018, she was promoted to the role of Camp Coordinator. Her positivity, good-humor, and passion for the Y's mission make her the perfect choice to be Point Bonita's Employee of the Year for 2018.

Scott Anderson is the type of instructor you dream of; he's inclusive, knowledgeable, empathetic, inspiring, genuine, friendly, dedicated, helpful, trustworthy and respectable. He has great knowledge of a myriad of formats from cycling to strength, cardio to mind body, and aqua to Active Older Adult. Recently, he came up with a new cardio class called Cardio Fusion (to replace a Zumba Gold class) and the participation has tripled! Scott has also been extremely successful during our Annual Campaign. This year he started with "Scott's 5k", looking to raise $5,000 and with immediate success he grew it to a "10K" … and then exceeded his initial goal to raise $11,000! Scott is a Rock Star and deserves to be Presidio Community YMCA’s Employee of the Year.

Alex has demonstrated tremendous professional and personal growth in the past year. Not only has she brought her own after school program at Argonne Elementary to new heights, she has also solidified her reputation as a veteran leader among her peers and staff in the youth department department. Alex embodies the values and culture of the Y - her passion, dedication, and work ethic help make our community stronger. We are grateful for all Alex has done to elevate our collective youth development work and we are excited to recognize her as Richmond District YMCA's Employee of the Year!

It’s fun working with Jimmy he’s very very energetic he is really funny and above all he is dedicated to the kids and to the families and he has grown so much. The kids go crazy when they see him and they always ask where he is if they don’t see him right away. Jimmy runs around with them, Jimmy embodies that idea of being child-like rather than childish.  He supports them, he celebrates their successes and we are proud to present Jimmy with Shih Yu-Lang Central’s Employee of the Year award.

No matter which of the many hats Tommy is wearing, he displays a genuine care for each person he works with, and an honest investment and enthusiasm for positively impacting the well-being of members and staff at Stonestown Family YMCA. Tommy has grown tremendously over the past year, embracing his role as a leader for our branch. He has been instrumental in successfully launching new and exciting healthy living programs,  with an eye for developing positive community relationships for members, participants, and staff.

There is nowhere you can go here in the Oceanview/Merced Terrace/Ingleside Heights (OMI) area without people saying, “Where’s Peter?”  They’ll say, “Hi it’s nice to meet you, but I know Peter.”  So if you walk in, he’s the first person to greet you so you see right then he just builds that bond and just his open, bubbly personality. Peter became facilitator of our men’s group, he became facilitator of our Asian-American Support group. Peter also was the main contact and facilitator for our weekly food pantry that served over 250 people on a weekly basis. He’s thoughtful, kind, smart, compassionate, always willing to go the extra mile for clients, the team, and the community. We can’t think of anyone more deserving of being Urban Services YMCA’s Employee of the Year.

Work for the Y

Be the change you want to see in the world- from teaching the next generation to designing programs that address the health and wellness of our community. Join our team of incredible staff, like these employees of the year, by making a difference through the Y.