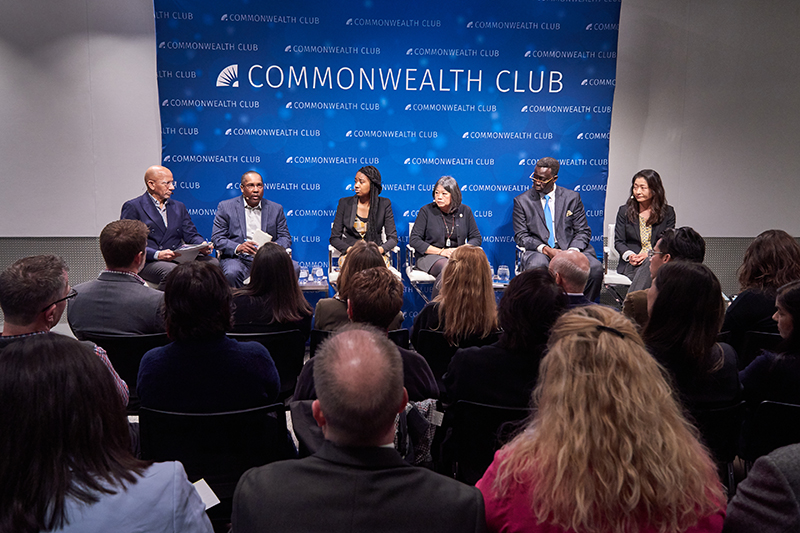 On Thursday, March 7, San Francisco business leaders and philanthropists gathered at the Commonwealth Club of San Francisco to discuss the importance of youth voice and the need to elevate the voice of our youth to enable them to make change happen in their own communities. The conversation focused on the disparities that exist for our youth and families and how local entities are working to close the gap in health, education and access to the outdoors.

With moderation from our President and CEO, Chuck Collins, the panel explored what youth of the Bay Area, country, and world are experiencing today, and how we can and must create safe spaces to ensure their safety and growth into active participants in our society. 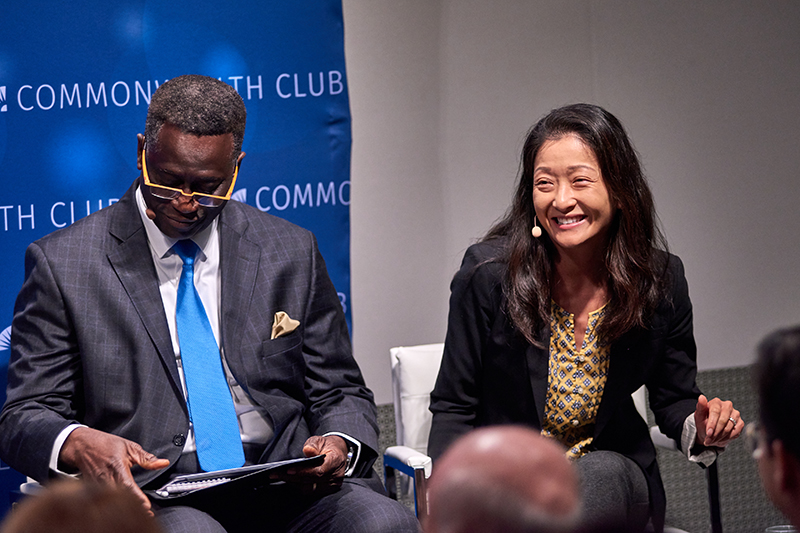 Dr. Maria Su recalls that she grew up near a YMCA in Chicago that fostered her growth, and laughs that it was just coincidence that she was asked to speak on a panel moderated by the San Francisco YMCA's CEO. 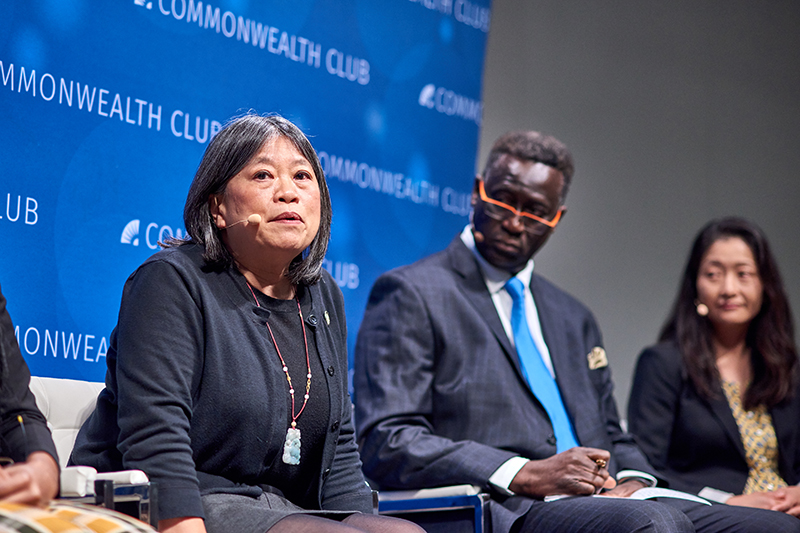 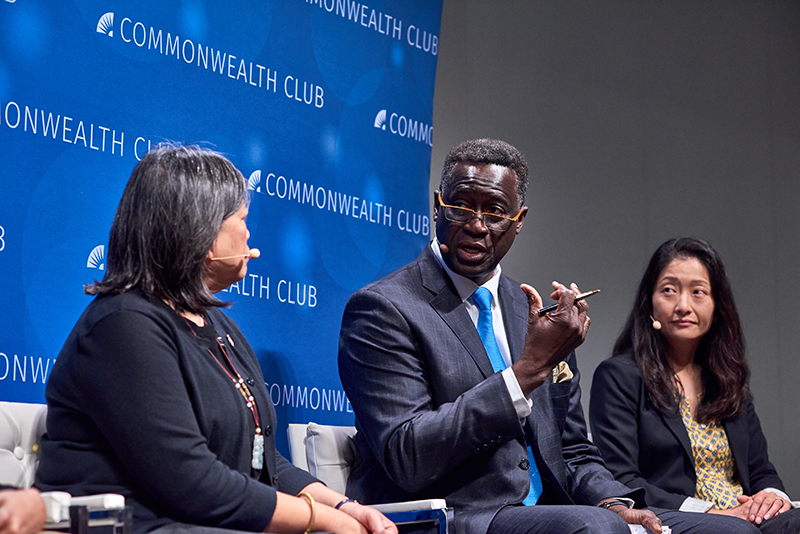 Carlos Sanvee spoke to the work the Y is doing across the world. "We say to the young people in my country, 'your voice counts.' 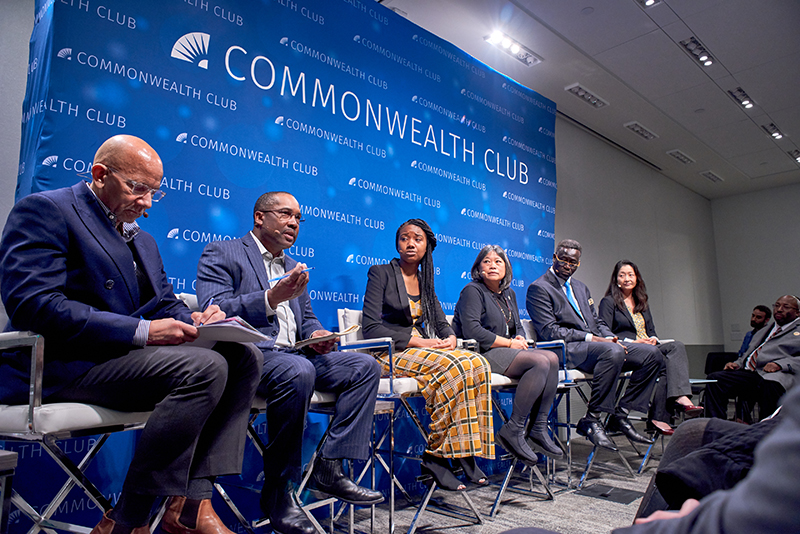 Sam Cobbs said, "San Francisco is small enough to get your arms around it. So how do we give access to our youth?"

Chuck Collins is the president and CEO of YMCA San Francisco where he leads a team of employees and volunteers committed to serving the diverse communities of the Bay Area. In addition, he oversees an annual budget of $85 million and executes the YMCA’s vision of providing children with the skills and habit forming to reach their highest potential. Collins received his bachelor’s from Williams College, master’s from the Massachusetts Institute of Technology, and his law degree from Harvard Law School.

Sam Cobbs has been involved with Tipping Point Community since it began, serving as the CEO of First Place for Youth, a long-standing grantee, for 12 years. Under Sam’s leadership, First Place grew from an Oakland-based grassroots organization into one of the largest providers of housing and services for former foster youth in the United States. He is a recipient of the Children and Family Fellowship from the Annie E. Casey Foundation and was awarded the 2010 James Irvine Foundation Leadership Award. Sam has also served in leadership positions at Larkin Street Youth Services, Juma Ventures, and the Boys & Girls Club of Oakland. He has a Master’s in Counseling from California State University, East Bay.

Nasina Chambers is currently pursuing a double major in Cognitive Science and African American Studies at the University of California, Berkeley. A participant in the San Francisco MYEEP program (The Mayor’s Youth Employment and Education Program) and graduate of multiple YMCA youth development programs, Chambers is a prime example of a young person who found her voice and excelled. A skilled orator, Nasina was an emcee for the YMCA of San Francisco Y For Youth event multiple times and served as the youth panelist for a Google sponsored screening of Selma.

Sandra Lee Fewer is a fourth generation Chinese American San Franciscan elected to serve District 1 (the Richmond and Lone Mountain) in San Francisco. From 2001 – 2009, Supervisor Fewer worked at Coleman Advocates for Children and Youth as the Director of Parent Organizing and Educational Policy, where she nurtured and empowered parent leaders. On the School Board, she led a new era of consensus, results-oriented leadership. She has heard from thousands of San Franciscans throughout her years as a parent, community organizer and School Board member. These voices remind her what is at stake when she votes on policies that impact current and future generations of young people in the City. In her early years, she served in numerous roles in support of public education including PTA President and school councils. She holds degrees from Golden Gate University and the City College of San Francisco.

Carlos Sanvee is the secretary general for the Global YMCA Alliance. He previously served as the general secretary for the African Alliance of YMCAs and special advisor to the secretary general of Global YMCA. Under Sanvee’s leadership, the African YMCA movement has made progress in positioning itself as a united continental body focusing on youth empowerment in Africa. He holds a degree in Physics and Chemistry from University du Benin in Togo and degree of higher studies from the University Lylumitere in France.

Dr. Maria Su is the Executive Director of the San Francisco Department of Children, Youth and Their Families (DCYF). She currently works as a commissioner on the San Francisco First 5 Children and Families Commission and is Co- Chair of the Juvenile Justice Coordinating Council. Su was appointed by Mayor Gavin Newsom to lead DCYF in 2009. DCYF allocated approximately $70M each year for services that support children and youth from birth to age 24 and their families. Su has worked in senior management posts at Vietnamese Youth Development Center in San Francisco’s Tenderloin District and at SF General Hospital- UCSF. Su received her degree in psychology from Boston University and Ph.D. from Alliant International University-CSPP.

Speaking Up for our Youth

Since 2012, Y for Youth has brought the Bay Area together to be inspired by youth and their community impact, celebrate the essential role that the YMCA of San Francisco plays in youth reaching their full potential, and recognize the Y's community investors.

The day after this panel discussion, we welcomed secretary general for the Global YMCA Alliance, Carlos Sanvee to our signature event where he shared his vision for the the global YMCA movement and its connection the impact we make in the lives of Bay Area youth every day.